Coding on the Osborne One with BASIC FUN

I've already put together a few historical notes from old papers and programs I've written. But now I've thrown some graphics to the "teenage-coding" repository that predate being a teenager by quite a while...
When I was 7 years old I was apparently taking notes on my opinions of my mad programming skillz. I even declared myself to have written "some of the best programs in the family" (although only one other family member even touched the computer). Despite the boasting, I still encouraged others that it wasn't actually as hard as it might seem... 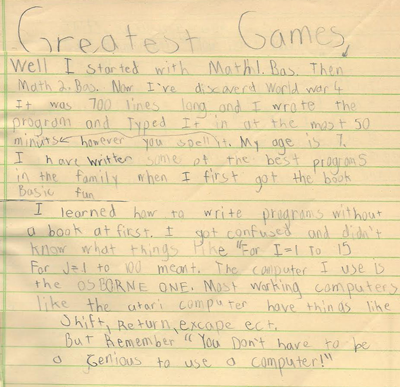 Here's a transcription, errors included:
My memory is naturally a bit fuzzy regarding the details. I don't even remember writing this note. (I do, however, remember those legal-sized yellow notepads quite clearly. It was the kind of scratch paper I had to do game designs on.)
But I do know 'basically' what I was talking about, pun intended. So here's some information to help put the note into context. 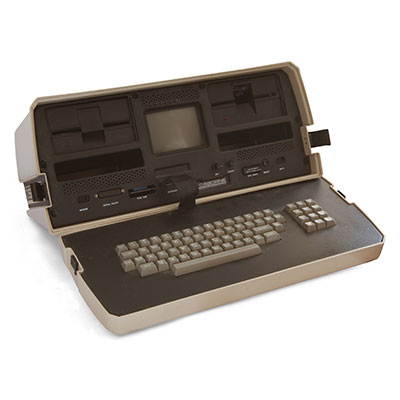 My father was a molecular biologist doing academic research. He wanted to use spreadsheets instead of a scientific calculator to get a handle on the data. But the lab didn't have computers in the budget...so he bought one himself.
I knew what video games were and wanted to know how to make them. But at first the only things at my disposal were some sample BASIC programs that came with the interpreter. That plus the insight of my father from one Fortran course he took in college (using punch cards) didn't help much.
Pretty sure that the programs I refer to as Math1.Bas and Math2.Bas were just simple "do your homework for you" things I had made. I could see from the samples how to process numbers and print the results, and how to read input. The programs are lost, but I'm pretty sure this was the gist:
My vague recollection is that Math1 was something that perhaps added and subtracted, and Math2 could also multiply and divide for you. That may not be precisely it, but it couldn't have been much more complex than that!

In the note I mention my early confusion with concepts like iteration (notably not needed for programs like Math1.Bas and Math2.Bas). Then I talk about things becoming clear once I got "BASIC FUN". It's a book whose cover I remember very clearly: 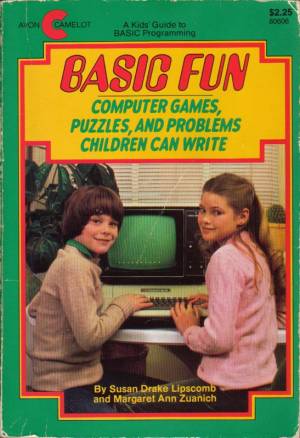 But beyond the cover, today I don't remember a whole lot about the writing. The only program that made a lasting impression on me was a sample showing you how to draw a rocket ship that would "blast off". The effect was created by drawing the rocket on the console one row at a time...and then continuing to print line feeds until the tail of the rocket had been cleared off the top of the screen.
Note It's actually kind of a profound "illusion" to realize a rocket "blasting off" could be made with such an effect. So perhaps not so surprising that's the only one I remembered.
I find the remark "I've discovered World War 4... it was 700 lines long." to be a hilarity on par with "I beat the Internet...the end guy is hard." Presumably what I meant to say was that I'd designed and coded a game titled World War 4.
While I have no clue what World War 4 was about, pretty much all the games I made in this era were nearly identical. They were patterned after Choose Your Own Adventure books, which were popular at the time. But while those books tended toward wanting you to make decisions based on critical thinking, mine were very contrarian. I'd punish the player for making the seemingly obvious choice, but a ridiculous choice would have some elaborate reason for why it was the right one.
Note In psychological retrospect this probably explains a lot about my life choices!

As an adult, seeing things like me starting to spell "genius" with a "j"...then having a second thought and starting it with a "G" but finishing it off with "enious" has a kind of ironic humor. But I think the note was trying to express a sincerity about how programming was interesting, and that which was once unknown can be known if only you have the right guidance.
Note I still believe that. My desire to put the right information into the hands of those who seek it drives me to pose as a (very) part-time teacher for kids on StackOverflow.
My curiosity became piqued in terms of how atypical this kind of writing and thinking would be for a 7 year old (of that era). I'm no expert on children, or what they are expected to do at what age. I tried to do some research and found a few references, this one from WebMD:

If that's true, I'd have been far ahead of the norm by merely writing at that point (not even accounting for the programming). So I'll forgive myself for not knowing how to spell words like "minutes" or "genius", and having some seemingly Random ideas About usage of capital Letters.
Note While we take it for granted that there's an "e" in "minute", that's actually a bit counterintuitive...it's not "houre" or "seconde". And given language patterns it almost seems like there should be an "ious" on "genious"...after all, how many English words a child might have noticed around them end in "ius"? It is well known that children sort and rationalize language, see for instance pidgins

I gave the Osborne One away somewhere around 1998, as I wanted to reclaim the closet space. It was in working condition, although it was certainly not "mint". Today on eBay a working "non-collectible" unit goes for $150, and I certainly didn't have one of the first manufacturing runs or anything.
What I do wish is that I'd gone through the disks to see if I could have found any of the Basic programs. But AFAIK, none of the source code to the 'GREATEST GAMES' survive. A loss to all mankind, who due to my oversight must resign their days to playing second-rate drivel like Portal 2. :-)

I know not with what weapons World War III will be fought, but World War IV will be fought with sticks and stones...
...it will also be written in CP/M BASIC, 700 lines long, and last at most 50 minutes.

COMBINE: an alternative to REJOIN for Rebol/Red
Machine Language for the Commodore 64 and 128